Metal-oxide nanofilms for photonics and optoelectronics: Functionalization of Eu oxides and WSe2 monolayers 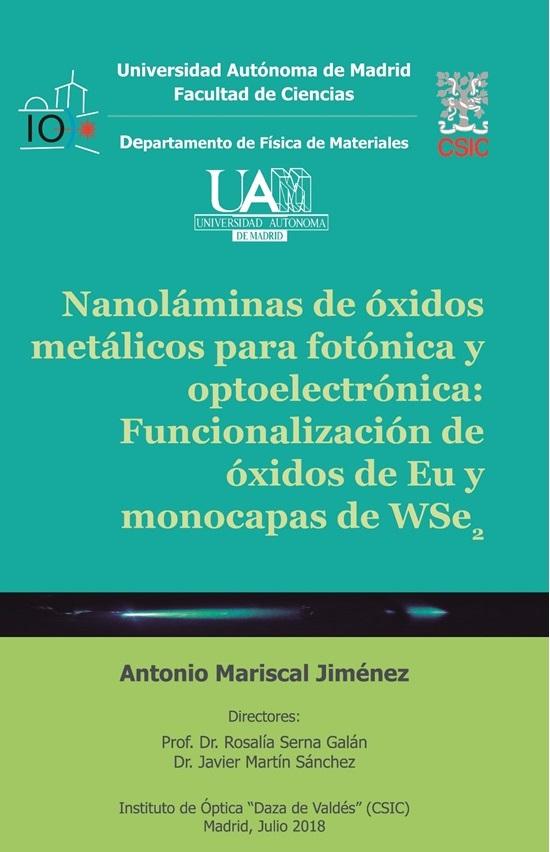 This PhD thesis shows the preparation, characterization and analysis of nanofilms based on metal oxides with the aim to obtain functional nanostructures in a controlled way. In particular we have studied europium oxides (EuOx with 1 ≤ x ≤ 1.5) and WSe2 monolayers encapsulated by aluminium oxide. The obtained results open new routes for the development of functional devices for photonics, optoelectronics and spintronics in case of EuO. This PhD thesis is focused on modifying the optical, electronic and magnetic response of the different materials under study, through the use and control of different physical and chemical phenomena such as: strain/stress, crystalline field, nanocrystalline size (quantum confinement), incorporation/annihilation of free carriers at the crystals boundaries, as well as modification of the stoichiometry. Most of the materials processing has been carried out using the pulsed laser deposition technique (PLD). Regarding the europium sesquioxide Eu2O3 nanofilms, the objective was twofold: 1) to develop a method to induce the monoclinic phase through low temperature treatments by means of the design of the nanostructure, and 2) use that methodology to control the crystalline phase and therefore, the light emission through the crystalline field effects. To achieve these objectives, the chemical, optical and structural properties of Eu2O3 nanofilms obtained by PLD, were characterized in detail. The nanofilms were grown at room temperature from a europium sesquioxide target Eu2O3. To study how the design of the nanostructure affects the films crystallization, three multilayer nanostructures were prepared based on the deposit of Eu2O3 and Al2O3 on Silicon substrates. Thin films of Al2O3, were used to encapsulate the Eu2O3 films, either forming a sandwich structure (bottom and top layers) or partially (only top layer). Subsequently, the structures were subjected to a thermal treatment in air at 500 and 850 °C, in order to promote their crystallization and to improve their photoluminiscense response. The XRD results show the monoclinic phase formation at low temperature for the Silicon/Eu2O3/Al2O3 configuration. This is a novel result since it shows how to induce the monoclinic phase (obtained conventionally with high temperature treatments, that is &gt; 1100 °C by means of a low temperature treatment 500 °C. The results also show how for the reference films (without Al2O3) layers) the cubic phase formation is favoured at 500 °C; demonstrating, in general, that it is possible to control the crystallization of one or the other phase by a suitable design of the nanostructure. Moreover, all the films exhibit photoluminiscense corresponding to the intra-4f transitions of the Eu3+ ions, however it is significantly different for each film configuration. Specifically, the changes in the emission of the transition 5D0 → 7F2, confirm the strong influence of the crystalline field effects on the energy levels of the Eu3+. The potential applications of these results encompass from crystalline sensors with applications in the field of construction, security markers by means of the fine control of the 5D0 → 7F2 transition splitting, biomedical applications, solid state lasers of high monochromatic purity (FWHM = 1.22 nm), as well as new phosphorescent devices with extended emission in red. For europium monoxide, the aim of the work was to obtain (EuOx with 1 ≤ x ≤ 1.5) nanocrystalline films with tunable optical and magnetic properties. To achieve this goal, a new deposit methodology by PLD at room temperature has been developed by using a target of the stable europium oxide, (Eu2O3). This method avoids the use of ultra-high-vacuum conditions, as well as the use of oxygen partial pressures, as it has been doing in most works reported to date. Furthermore, by means of the analysis of the spectroscopic ellipsometry measurements, the dielectric function of EuOx nanofilms have been obtained for the first time; up-to-date it had only been reported for the bulk material and purely stoichiometric. Regarding the main results, it is shown that the nanofilms response (both optical and magnetic) can be modified by controlling the base pressure of the growth chamber, and is associated, on the one hand, with the quantum confinement undergone by the magnetic exciton within the nanocrystal (quantum dot structure), and on the other hand, with the incorporation of oxygen on the nanocrystals surface that modifies the concentration of free carriers, thus affecting their optoelectronic properties. Through this modification, it is possible to achieve a blue shift of the band-gap up to 0.48 eV respect to the value of the EuO reference (1.12 eV); this is the largest shift achieved to date. In addition, the EuO films grown in this work show an excellent magnetic response compared to previous works with coercive fields in the range of 70 Oe to 120 Oe. The results are promising for spintronic applications or for their incorporation in devices based on diluted magnetic semiconductors. To carry out the research on the two-dimensional materials (2D), the PhD student has designed, configured and developed a micro- photoluminiscense characterization system. In this case, the main objectives were: 1) to achieve an efficient method that allows the encapsulation of 2D materials without modifying their optical response; 2) or that the produced modification in the optical response could be controlled. To achieve this goal, the WSe2 thin films encapsulation was investigated by depositing Al2O3 thin layers using either ALD (Atomic Layer Deposition), or PLD. The results show that if the stoichiometry of the Al2O3 layer is maintained, it is possible to preserve the optical properties of the monolayers. In addition, the AFM (Atomic Force Microscopy) measurements show that the WSe2monolayer coating obtained by PLD is uniform with peak-peak roughness values of ≈ 3 nm. This encapsulation outperforms that obtained by ALD, in spite of ALD being one of the reference techniques of the semiconductor industry. ALD deposition gives rise to non-homogeneous coatings that show a high roughness with a peak-peak value up to 10 nm. Finally, it is shown that the encapsulation by means of sub-stoichiometric oxide thin films allows to control the electronic doping of the WSe2monolayer on a nanometric scale, which may have important applications for the design of nanodevices.