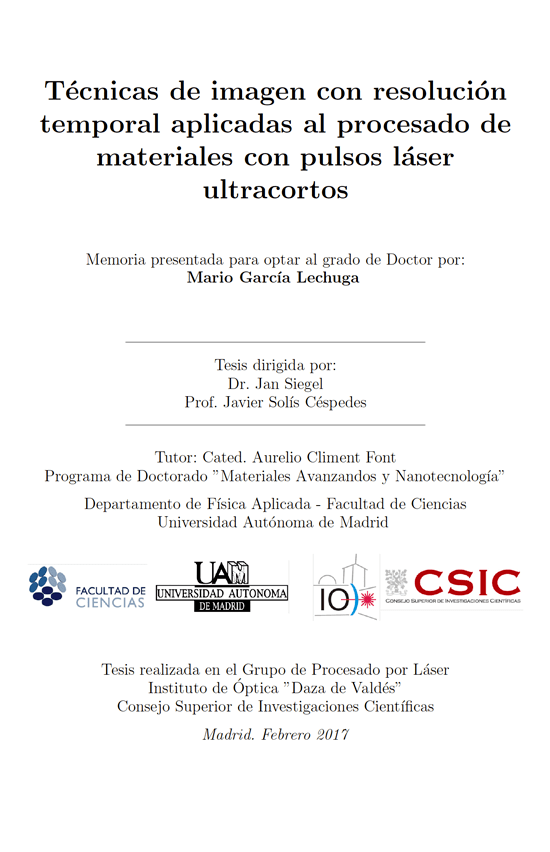 The use of femtosecond laser pulses for material processing is becoming a powerful alternative to existing methods, especially for surface material nano and microprocessing. One of the main reasons is the high electric eld intensity of ultrashort pulses, which allows modifying even transparent materials enabled by non-linear photon absorption. A further benet of the ultrashort excitation time is given by the fact that the energy deposition is deposited into the electronic system, well before conversion into heat occurs, producing spatially deterministic modications and much less collateral damage caused by thermal eects, when compared to longer pulses.

However, the fundamental knowledge of the underlying mechanisms that lead to the nal material modication is still incomplete. In order to better understand these mechanisms, femtosecond laser pulses can also be used as a tool to investigate the dierent processes. Due to their ultrashort duration they can observe dierent moments of the fast transformation dynamics of the material; a technique denominated as \pump-and-probe”.

In this PhD thesis an optical pump-and-probe technique combined with an in-situ microscopy system is used, recording snapshots of the sample surface with ultrashort temporal resolution and micrometric spatial resolution. A description of the improvements made to the technique is included. The main scientic ndings obtained are summarized in the following sections.

First, the interaction of single fs laser pulses with the surface of lithium niobate is investigated in a regime of ablation of a thin layer. At ultrashort time delays, the formation of a free electron plasma and the appearance of the instantaneous optical Kerr eect is observed. The results also conrm the presence of a delayed carrier generation mechanism, leading to a build up of the electron density well beyond the end of the laser pulse. Moreover, the appearance of an interference phenomenon is observed during the ablation process, the so-called
transient Newton rings, which is veried and studied in detail using two dierent probe pulse wavelengths. The experimental results combined with optical modelling reveal that the ablation process is triggered by a rarefaction wave propagating inside the material, which causes the formation of a thin layer of lower density that expands and evolves into a shell-like structure before disintegrating.
This nding is of fundamental importance as it demonstrates that certain dielectrics follow the same thermodynamic pathway during ablation as metals and semiconductors.

Second, the formation dynamics of a heat-aected layer produced in a phosphate glass after irradiation below the ablation threshold is investigated. In order to follow the long lasting thermal eects occurring on a time scale of tens to hundreds of nanoseconds, a ber-based optical delay module has been developed, allowing to explore delays up to 500 ns. By means of image analysis combined with optical modelling, the temporal evolution of a viscous layer propagating into the material is determined. This nding demonstrates the importance of
thermal eects in processing with ultrashort laser pulses, opposed to the oftenclaimed but too-simplied concept of non-thermal laser-matter interaction.

Third, a novel strategy is presented that is capable of fabricating homogeneous laser-induced periodic surface structures (LIPSS) and simultaneously resolving their formation dynamics. This strategy is applied to the study of alternate amorphous-crystalline fringes produced in silicon upon irradiation with several fs pulses. Employing this technique, it is possible to resolve the birth and growth of individual fringes. The involved processes that have been identied in this study include the spatially selective formation of a high electron density,
followed by non-thermal melting of a thin layer and rapid solidication into the amorphous phase. The results are consistent with a local eld enhancement produced by the interference of the incoming light and scattered light.

The results presented in this thesis yield relevant information about several important physical mechanisms present in laser-matter interaction. The ndings have potential to contribute to the optimization of material processing with femtosecond laser pulses in industrial applications.