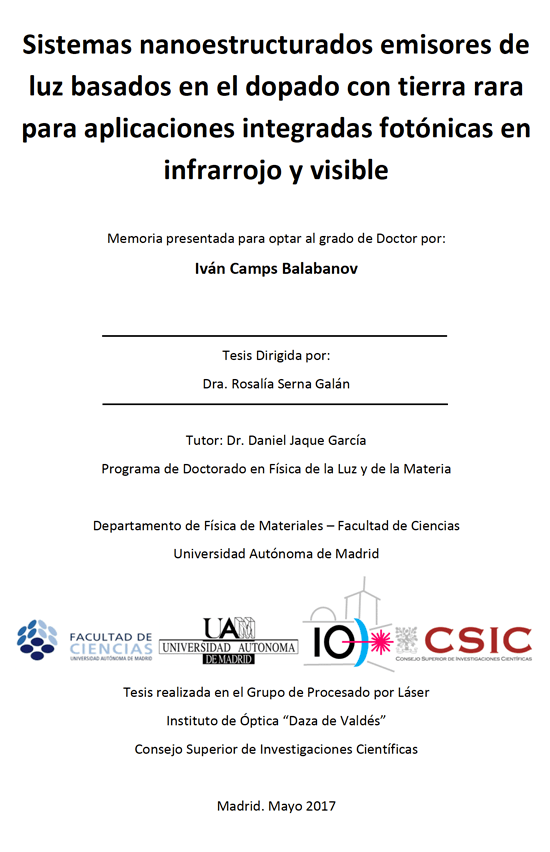 Currently the advance of light emitting devices (LEDs) technology requires a detailed study of the physical processes and chemical properties of the components of the involved materials. In order to enable the development of novel luminescent systems that take advantage of the greater possible efficiency of the energy involved, it is necessary to improve the structures, materials and/or processes available nowadays. A very promising approach is to make use of nanostructured systems, either in the form of crystalline powders or thin films, because it is possible to have control and perform design at the nanoscale of each of the components, increasing the efficiency in the use of the raw material and maximize its specific performance. In this work we present a study of the properties of three materials: TiO2, Al2O3, SiAlON, implemented as matrices; and the optical performance of active elements of rare earth (RE) ions introduced: Er3+, Eu3+, Tb3+, Tm3+, Eu2+. The first part covers the characterization of materials in the form of TiO2 xerogels doped with Er and Eu as optical probes of crystallinity and as efficient systems of light emission in the near infrared (NIR) and visible (Vis) spectral ranges, respectively. In the second part we present the studies of luminescent thin-film systems composed by rare earth doped multilayers of dielectrics, highly compatible with the current Si-based technologies. Among the systems that were designed and manufactured for this thesis are the multilayer nanostructures of thin films of Al2O3:Eu that, depending on the volumetric concentration of Eu, it could be obtained from white light emissions in the form of broadband to emissions in the red composed by discrete peaks; thin films of Al2O3:Eu:Tb:Tm, called RGB, which combine the individual emissions of each RE in a specific region of the visible spectrum in the form of discrete peaks; once integrated these achieved white light with adjustable chromatic properties; and finally, thin films of SiAlON:Eu that exhibited broadband white light emissions, covering most of the visible spectrum and whose chromatic properties are adjustable as a function of the Eu concentration.