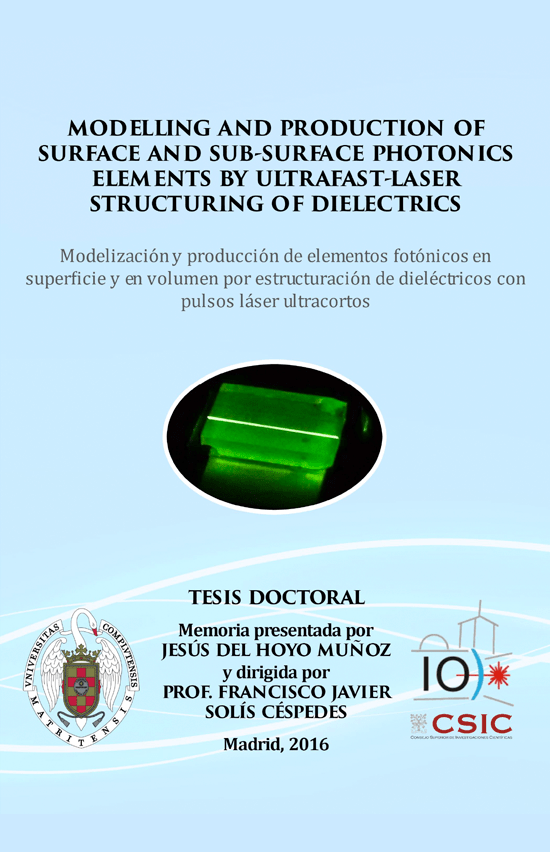 Photonics was born with the advent of lasers. Lasers provided the kind of light required for the development of active and passive photonics devices. Ultrafast pulsed lasers provided, in addition, enough optical power to study the interaction of light with matter beyond the linear regime. Non-linear optical phenomena are the base for the development of non-linear laser processing of transparent materials (dielectrics), a laser processing approach that has unique characteristics in terms of resolution, versatility and 3D-processing capabilities for the production of photonic devices.

Fs-laser writing has been indeed successfully applied to the production of a large variety of high performance passive and active devices in 2D and 3D configuration. In spite of this success, sub-surface fs-laser writing has several limitations that hamper its widespread application for the production of photonics devices. The first one is the limited refractive index contrast (n) that can be achieved using conventional modification mechanisms (i.e. local glass matrix densification, or polarizability changes, generation of point defects or changes in the glass network configuration). With a few exceptions, the maximum index contrast achievable is normally below 10-2, which limits the performance of the produced devices. Also, the presence of optical nonlinearities is inherent to the propagation of fs-laser pulses inside dielectrics. When the material shows a high non-linear refractive index, as it happens in crystalline materials or glasses with a high linear refractive index, the distortion of the desired energy deposition profile severely affects the control over the morphology of the structure. Finally, fs-laser processing can be similarly used for micro-structuring applications at the surface of dielectrics in order to produce active and passive surface waveguides. However, scattering losses at the channel walls produced by fs-laser ablation usually lead to high losses that strongly limit the performance of fs-laser structured surface waveguide-based devices.

The global aim of thesis is improving the performance of photonic devices fabricated by fs-laser structuring in glasses and crystalline materials. We have considered three different aspects for this improvement: the role of roughness in the performance of fs-laser surface structured photonics devices, the development of a low computational cost nonlinear propagation code to predict optimal processing conditions for subsurface processing of dielectrics under simplified interaction conditions, and the feasibility of producing highly efficient active devices in waveguides produced by fs-laser induced ion migration.

The roughness of ablation channels structured in the surface of crystalline samples using different types of laser beams has been analyzed. Optimized ablation channels inscribed using multiplexed Gaussian beams show a wall roughness with a feature size of ~250 nm. This enables the production of waveguides with propagation loses of the order of 1 dB/cm. In the case of KY(WO4)2 doped with Yb3+, propagation losses lower than 1.5 dB/cm have been obtained using this approach. A mirror-less laser cavity was implemented in this waveguide (8.2 mm), achieving a 78% of slope efficiency at 1001 nm. The losses of the waveguides could be reduced even further (below 0.5 dB/cm) for waveguides in load configuration. This reduction potentially enables producing even more efficient lasers.

The problem of the influence of nonlinear effects in the energy deposition profile has been boarded by developing a simulation code (Propagador) capable of simulating the nonlinear propagation inside dielectric materials in realistic laser processing conditions at low repletion rate (LRR), with calculation time of the order of few minutes in an ordinary computer has been developed. The conditions where the approximations made in the Propagador model remain valid have been thoroughly discussed. Simulations performed using Propagador matched the results obtained in soliton shaping experiments, enabling the determination of the nonlinear coefficients of the glass where these experiments were performed. The calculated values were nearly identical to the ones obtained using more complex models. Also, the comparison between Propagador simulations and sub-surface laser-written waveguides (at LRR) again allowed determining of the material nonlinear coefficients upon multiple pulse exposure. Finally, some other applications of Propagador were shown, like the use of SLMs for pre-compensating the distortion generated in the energy deposition profiles by spherical aberration and nonlinear propagation and absorption.

Finally, the problem of the limited Δn in sub-surface fs-laser structured glasses has been solved by producing photonic devices inside glasses using ion migration induced by fs-laser irradiation at high repetition rate (HRR). Waveguides are produced by a cross-migration mechanism between K+ and La3+ ions, Δn being determined by the local enrichment in La3+. A maximum Δn value of 1.5×10-2 was achieved, which can potentially be increased for different glass compositions or irradiation conditions. The feasibility of controlling the size of the guiding region, and the refractive index change via laser-writing parameters has been similarly demonstrated. It has been shown that the enrichment in La3+ ions, and thus Δn, can be determined by measuring the optical properties of waveguides co-doped with Er3+. The control of the waveguide features via laser writing parameters enables fabricating highly efficient waveguides with different active properties in the same glass. Two active waveguides were fabricated in the same sample doped with Er3+ and Yb3+, one with a net gain of 9 dB, and another with lasing slope efficiency of 38% and lasing threshold of 22 mW at 1534 nm. This is, to our knowledge, the highest slope efficiency at 1534 nm ever achieved in a fs-laser written waveguide in phosphate glass.