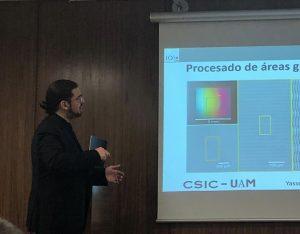 The present work addresses the controlled formation of Laser Induced Periodic Surface Structures (LIPSS) using femtosecond laser pulses. It was initiated with the formation of amorphous micro- and nanostructures on crystalline silicon. Afterwards, ripples of amorphouscrystalline LIPSS (ac-LIPSS) were fabricated. The study was extended in order to control the period, thickness and lateral dimensions of the fringes. In particular, it was discovered how to select just one of the two periods of ripples that are formed when performing oblique irradiation. The technique consists in sweeping the beam on the sample rather in one or the other direction due to front- or backscatter of the incident laser beam.

In a second stage, it was studied ablative LIPSS in copper. It was identified a processing regime which produces two different periods coexisting with spatial separation. In addition, it was introduced a roughness-plasmonic model given that the simple plasmonic model tends to overestimate the periods fabricated when irradiations are made with an oblique angle. This new model takes into account the influence of the surface’s roughness on the surface plasmon polariton (SPP) formation. The theoretical results fit adequately the ripples thus obtained. Additionally, in thin layers of copper it was verified the importance of the number of overscans for the LIPSS formation, along with the traveling fringes phenomenon: ripples that are apparently moving across the surface during the irradiation. Its role was discussed in the degradation of LIPSS that are formed with a single scan.

The final part was dedicated to the formation of LIPSS in steel. The quill writing effect or non-reciprocal writing was discovered when processing the surfaces at oblique angle while scanning the sample. This phenomenon allows to select with great finesse the ripples period just by inverting the scan direction. The underlying mechanisms are related to the asymmetric roughness formation at angled incidence. Consequently, different values of roughness at different positions generate different wavevector of the surface plasmon polariton in function of the scan direction. In addition, it was adapted the roughness-plasmonic model to absorbent materials such as steel, using an effective dielectric constant. Finally, it was performed femtosecond pump-probe imaging and real time reflectivity measurements to study the reflectivity dynamics when the sample is irradiated by fs pulses.